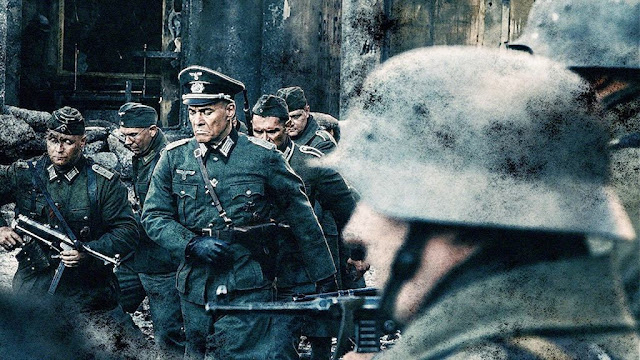 This was first published in May 2013 and was another game versus FargoGamer that unfortunately is missing all the pictures. The highlight for me was the factory collapsing which took ages to work out what to do but was a blast when it was done..

Col Kasmar was not happy. Before him stood his two leading subordinates – Major Tzneetch and Captain Essou . They had had the misfortune to bring word of a strong German counterattack. Didn’t the Nazi idiots know when they were beaten?  Not only that the Germans were using bloody pigeons or soldiers with wings (paratroopers even) and these were even more square headed and obstinate than the normal German soldiers.  To make his day even worse his cook had over seasoned the large Russian sausage he had eaten for breakfast.He sneezed.
Bless you”, said his equerry
“Yes?” said Essou, who was slightly deaf from driving round in tanks all day.
“No, bless you”, responded the equerry he turned to Tzneetch, ” Tzneetch – “
“Bless you”, replied Essou
“FOR F**KS SAKE” roared Kasmar – “YOU ” he pointed a large meaty finger at Tzneetch, ” you will now be known as weeble One and YOU” he pointed at Essou, ” will be weeble two “
“I don’t think that is appropriate for a Soviet officer”, said Essou
“Do I give a german for what you think? Plus, since when have Russian officers been stuck up about manners. Anyone would think you were British.”
He paused to allow his subordinates time to consider. They needed it and he could see the confusion on both faces. In the end though basic Russian passiveness took over and both faces cleared.
“Good – weeble two set up you tanks in a central location. Your job is to provide fire support and avoid getting killed”
“Don’t worry Sir my men won’t wobble or fall over”
“weeble one. Infantry in a loose defensive position out of sight of the enemy please. Leave the left flank – it provides too much cover for the Nazi scum buckets to utilize”
“What’s a scum bucket?”, Essou whispered to Tzneetch
“A collection receptacle for German waste products I think” responded Tzneetch.
Kasmar started drumming his fingers on the table whilst he laid the other on a large pistol to provide positive, friendly reinforcement to his unstated message. It worked and they quieted.
“I shall lead in a relief force from the South and we shall crush the Germans like those round orange coloured things that the party commissars eat”
“That would be Oranges Sir”, said his equerry
“Remember Comrade Stalin has said this fortress must be crushed and crushed it shall be. He has also stated he is right with us”
“That’s crap, unless by ‘right with us’ he means living in a luxurious mansion eight hundred miles away” – Kasmar considered that Essou was not showing the correct levels of Soviet like obedience of respect for authority. Maybe he would have to arrange a meeting with the commissars after this battle was won.
He waved his hand dismissively and as they left put his head in his hands as he heard Essou saying to Tzneetch – “why was he waving”
“Bad food- did you see the state of that sausage, probably needed a collection receptacle”