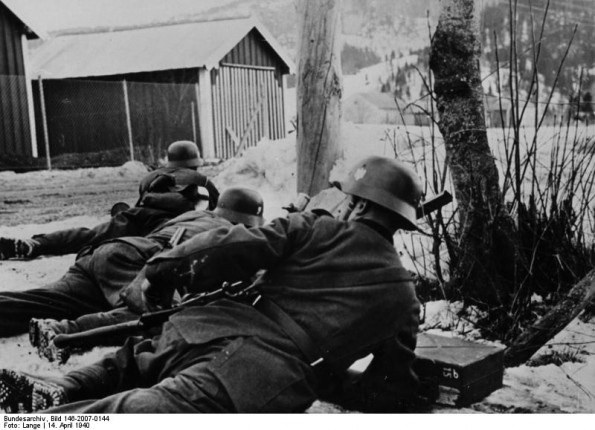 The last game was a Sunday shorter game versus Paul Legg and we chose ‘Make way for the king’ a Norwegian versus unhappy German paratrooper scenario from ‘Friendly Fire’. The Norwegians have five and a half turns to remove all but one squad from any buildings/foxholes on board 4a along with a heavy machine gun and large 81 inch mortar. I thought attacking would be fun so went for the Norwegians whilst Paul took the Germans. ROAR wise there were few playing’s and this was a 9:5 in favour of the Germans which is not enough info to make a balance judgement. It was popular on the day though and if I remember correctly the Germans won them all. Possibly because this like one of the other final round scenarios (Raider Ridge) could involve a bug hunt. Setup: I think I should have spread out to the North as well perhaps and not left my best officer with the Heavy machine gun.
Anyhow I decided to use the vast sweep of open ground to the left to place my heavy machine gun and mortar and use those to allow me to get into the town attacking to the south. I immediately hit an issue in that I forgot my opponent had lots of extra concealment so allowed myself to be tricked into moving slowly in the first turn to break what turned out to be a half squad and a few dummies. All in all though my attack was initially successful with some mortared smoke proving particularly useful in getting me forward. The problem rapidly became one of how to break the paras in the time remaining and after losing an officer to the sniper my ability to rally was knocked down. Already in the village you can see the paratrooper to the right ‘loitering with intent’. The northerly concealed stack are all dummies and the middle one is the wounded officer.
A huge long running combat ( one German squad + wounded officer versus three of mine) dragged on three player turns delaying my troops and I was dealt a death blow by turn four when I suddenly realised the reason a full squad was hanging round in the woods to the right must be a foxhole. It turned out I was right and this flustered me big time as I was on target to leave one German in a building but now was faced with needing to take an extra one out. This confusion promptly made things worse as I had been happily demoralising a broken full squad (which could not rout to the woods to avoid this fire as that would take it out of a building thus making it irrelevant to the victory conditions) and in the last German turn shot two squads at the foxhole destined paratroopers with bad odds shots that did nothing leaving me unable to demoralise that squad again who promptly rallied leaving me with four squads capable of fulfilling the victory conditions and me needing to break/kill three of them. Two might have been possible but three was not. I did my best though managing to take one out in combat and throwing troops suicidally towards the others (as before a sign of having lost the scenario much earlier). In the end I had an officer on his own taking on a paratrooper needing a double one which he easily failed to get and I lost.

It was a fun scenario though where I was punished for not fully absorbing the implications of the hidden foxholes and recognising the change of dummies early on. My opponent also played competently with what limited resources he had and thus won the day with some ease. As with most of the scenarios I would play again. If the Norwegian player moves fast enough (and perhaps keeps the 9-1 leader close behind the assaulting forces) then there is some probable camouflage funkiness along the lines of getting concealment then assault moving into open ground next to a German and then advancing in and going for an ambush at neg three with the combat roll at neg two (allowing the ambush occurs) to further reduce the Germans. Plenty of possibilities. I also liked (for the Germans) the idea of setting up all the foxholes outside the village boundaries at opposite compass arcs as opposed to setting them up in the village. End position with three full squads in buildings/foxholes so the Germans beat the victory requirement by two.
So ended the tournament. I have focused on the games because I knew very few people and was so knackered both nights (plus finished late on the Saturday) so that I missed the bar and the more socially inclined ASLers. I had been curious as the game is so cerebral that I cannot see how you could play two full games get drunk, play another, get up five hours later and play more. I don’t think I could cope but this could also be me having very small children and an urgent need for sleep whenever possible. The tournament, bar my horrible arrival (this just needs a note to the organiser next time to request my key is left with the night porter) was well run in a pleasant location (I didn’t think it was possible to have no traffic noise that close to a large town and arterial road) with a nice cheap subsidised canteen close by and as much free coffee/tea as required. So I am already looking forward to next year. It would be nice to attend some of the other larger UK tournaments (or even European/U.S ones) but with my two boys and my wife’s working patterns that won’t be possible for several years. Never noticed before how much a room of players of ASL look like they all giving grace or praying. My wife says its a bit like American football to watch. A flurry of activity then everything stops for five minutes before the next flurry.
Other pluses are that I picked up some new rules and ways of approaching certain things (height for one thing, I never could understand height in game before this) and met some nice people. I don’t think you can play ASL casually if you don’t mind losing due to the amount of time it soaks up but I was curious to see if there was any aggressive rules lawyers in the competition circuit having met several in miniature war gaming through the years and I must say that all the players I encountered were so good natured that I drove home quite happy.