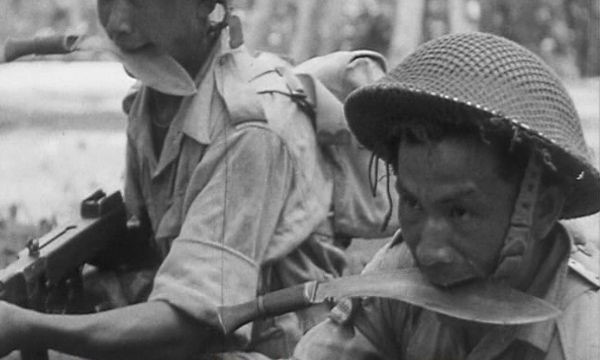 I had pre-signed up for a mini and gone for the latest Pacific Action Pack one (the mini was called ‘Fort in the jungle’ – I see what the competition organiser did there, nice) and it (and the others) were fairly simple affairs with four players over two rounds and a choice of three scenarios in each round, straight knock out though the first round losers tended to play each other after though it was not required. My opponent for the first round was Dominic McGrath who kindly helped me carry my gear from the car to the competition location.
We decided between us on ‘Milling About’ and after a brief flick through the SSR’s and a rule read up on ‘Cactus Hedges’ we rolled for sides with neither of us being particularly concerned which side we obtained. I gained the Japanese. As time was passing due to my tardy arrival we put a spare board up and setup. Apart from me mistaking the depression next to the IJA startup area for a marsh (duh… thus unnaturally limiting my options beforehand) there are not a lot of mistakes to make really. Just past Setup, we could not find any wall advantage counters so used a campaign one to do the same job. I have just opened fire with what became my right flanking formation.
Now I quite like this setup type as the attacker has such a limited area to set up in that there is not a huge amount of thought required and you are re-acting (eventually) to what you see. As it stands what I saw was a light screen along the road with two reserve forces increasing in size the further back you went. I won the die roll for starting and decided to leave a reasonable force at the road but attempt to sweep up the left side of the cactus hedge in strength. I duly carried this out so Dominic moved his well-placed reserves across to block this approach. Indeed he moved so many troops back (including several from the screen) that I was able to get my right holding force forward and damage the screen. By around turn three large Gurkha formations were taking position at the top left exit point of the map with the majority of the rest in the woods north of the hedge. I almost resolved to ignore the exit points and swing all my troops back into the centre to crush the middle force when I noticed the handy wall on the left of the map (and yes I now know for all those familiar with the scenario but we will get to that later). So hopping behind that I used that as cover for some strong stacks to essentially avoid the holding forces fire.
Elsewhere I pushed my remaining troops forward to attempt to pin the remaining Gurkha’s in play. At one point I attempted a dc hero who sprinted across open ground towards a very large stack (Two Gurkha squads an officer and a mortar if I remember correctly) and got into the hex next door when the officer was wounded and lost all his movement and thus exploded somewhat prematurely next door. Shame as that would have been a story to tell had he succeeded. The 6 resid was where my DC hero died to a large stack and you can see on the right my valiant right flankers chasing down a squad and on the left how heavily I was using the wall. At the top left you can see the large Gurkha formations preparing to block exit.
Meanwhile my originally right flank holding force was chasing a Gurkha squad with a concealed officer (I think). Eventually I advanced into combat which was somewhat risky as he had around -3 on the ambush roll. I rolled (I cannot remember what) but I do remember the only result that would not have meant I was ambushed would be a six – which he duly rolled. I failed to kill anything and his combat roll was a twelve allowing me to move out and flank him either side. This prevented his continued slow delaying withdrawal and he had to move out but next to one of my squads. The one he chose then broke him in Defensive fire. This basically allowed an officer and two squads to scurry to the far right of the map and eventually leave un-opposed for ten victory points.
Everything though depended on the left flank and here I had a plan. I Banzaied an officer and squad onto the closest enemy troops locking them in combat then moved a squad a hex line in from the edge to draw the first fires and restrict the residual I would have to get through (and thus due to the Banzai squad prevent subsequent first fire). He striped but got off. I could then move everyone else with just a two down two (then one residual for the rest) off the board. Winning. The top left corner at the end. The broken LMG is where my banzai ended up and on B0 you can see my fire drawing squad leaving the A4 dudes and some more further south to run off.
Well I had not expected to win as I was knackered but it was nice to do so anyway so we now went into the usual post game analysis. As part of this my opponent had said that what he had found particularly difficult to handle had been the wall on the far left and the open ground behind jungle on the far right. Then with sudden inspiration he re-checked the scenario card and yes both those hex rows were disallowed. Basically we had played an entirely illegal version of the scenario where the Japanese had a big advantage. I could not even claim that it had been a slight infringement as I had used both paths very aggressively (once I had noticed them). Without those routes I don’t know what would have happened but did feel that I had been generally outplayed so would probably not have done well so I decided to concede instead.  I was not particularly bothered by winning and would have felt grubby taking the win in those circumstance. I should note my opponent made no attempt at all to ask me to concede and had been happy to take the loss as neither of us had noticed and it had been played in good faith.
This leads me back to the lengthy ‘journey down’ post as I am fairly certain that had I not had the rushed journey I had had then having the time to review the scenario then this mistake would not have happened. The main thing though was that I had enjoyed the game and been impressed by my opponents setup and manoeuvrings which is impressive considering the mood I started in. Dominic went on to win both this mini and his main tournament grouping so was either on form or a good player (or both). Onwards for the next game report tomorrow. I might even manage to win a close combat….