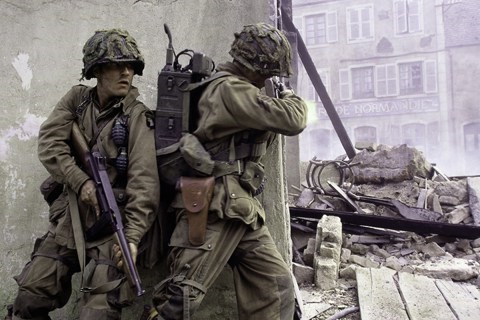 To begin at the beginning (and in this case I really mean the beginning) my new opponent (who I shall cunningly call ‘Bob’ to disguise his secret identity. ‘Bob’  is an experienced war and board gamer but one who has not yet dipped his toe into ASL. Perhaps instead regarding it suspiciously for years..) Anyway due to this the blog is going to restart on the starter kit scenarios. Makes sense, plus it allows me to gently relearn all the stuff I am likely to have forgotten.
All going well he will eventually graduate onto full ASL. As such the initial blog posts will be more targeted towards beginners. I tend to fully use what I term the ‘dozy’ approach to Starter Kit games with a beginner so will take moves I would never do in a full game as it assists the learning process for my opponent and levels the gaming playing field. This has proved counter productive in the past when in one memorable game of S1 I basically ran all my units into the open, next door to the evil enemy in a furious attempt to ‘not win easily’ and every squad survived every single shot to ‘win easily and utterly dishearten my opponent’. Bloody dice. The other thing I tend to do against beginners is avoid introducing some of the more ‘gamey’ tactics unless my loss is almost guaranteed. Therefore (as an example) I will not skulk any units unless I can see the loss is almost predetermined, then it can be introduced with a ‘look at this!’. This is mainly as competition has no real point when learning to play a game. Or at least it doesn’t unless you’re an **** – all those people sitting out there mumbling self-satisfied to themselves,  ‘you wont learn unless I make you my ‘bitch’ due to my superior rule knowledge of stuff you don’t have a clue about’, as if that worked for anyone who was not 100% committed to the game.
We will also hopefully be following the excellent battle schools starter kit scenario progression which is….
S1 Retaking ViervilleS5 Clearing ColevilleS3 Simple EquationsS4 Welcome BackS6 Released from the eastS2 War of the Rats
Scenario
The initial starter kit scenario does a good job of introducing the turn template to prospective (and existing players) by utterly ignoring support weapons and anything with a barrel size larger than a machine gun or with wheels for that matter. When combined with the subtle and nicely balanced force size progression it also does not bog down a prospective player with too many things (units….) to think about whilst at the same time steadily increasing those units throughout the scenario so it is equally not too dependent on lucky dice rolls. Therefore the first scenario is focusing on the a simplified turn structure along with fire movement and basic morale. This is the beating heart of the system so seems a sensible approach.
The scenario is loosely based on the 101st Airborne’s combats around Vierville in early June 1944. Here forces from the 2nd Battalion has seized the village and then moved on leaving the 1st battalion to defend it against counterattacks from random German units and the more efficient 6th Fallschirmjäger Regiment (led by a Colonel von der Haydte). The famous Easy Company was in reserve just outside the village.  I am not certain if Easy company did come to the rescue but for the purposes of the scenario (as the description does not entirely match the history) that is indeed what I will be picturing when the later airborne reinforcements arrive.
Since the scenario is heavily ‘roar’ balanced towards the Americans that is the side I propose for my beginning opponent to take. There is little in it really as both sides get to attack and defend and bar a German relative the US paratroopers will be popular for the majority of gamers. Plus prospective gamers can watch Band of Brothers episode 3 to ‘immerse’ themselves in the action if the visual stimulus would help.
The Game
For a stripped down scenario this is actually nicely balanced and ‘fun’. It is also possibly the most blogged scenario in the ASL cannon (bar perhaps Red Barricades campaigns). Rather than carry out the usual blow by blow description I thought it would be easier to describe the progression of rules knowledge that occurred (woohoo ‘fun’). My oppo had obviously made some efforts to understand the basics as the basic structure and adjustments to morale and ift were very good so he usually correctly worked out the right column and adjustment without help beyond confirmation. Problem areas were unsurprisingly marker addition and removal, knock on morale effects (so 2mc breaks officer, a squad which elrs and a squad which does not break but then has to take a leader loss task check – writing this it suddenly strikes me that LLTC might not exist in starter kits so potentially ‘woops’) and finally attacking flow.

End of German One. Aiming to use Eastern force to pressurise US reinforcements and western to take village
The attacking ‘flow’ issue was resolved fairly quickly and was helped by the sacrificial nature of the US starting forces. These basically succumbed to German pressure very quickly without doing much damage at all with the notable exception of one psychotically hard 7-4-7 and a half squad who held around 5 German squads in combat until the last turn.

US reinforcements happy to trade fire whilst the village defenders look increasingly threatened
In the North the German eastern reinforcements had mainly gone to the Northern end of the village where they proved an attractive prep fire target for the US paratroopers who promptly made repeated failing attacks until turn three.
If things had continued this way then the valiant 101st airborne  would have had trouble dealing with the forces of evil in the time remaining but eventually the northern force stormed forward and the initial elements naturally got shot to pieces. One squad survived to move into close combat with a German paratrooper and this allowed the final arrival of E company (in my head) to get much closer to the action. Here some lucky low roll high odds shots broke some of the defenders and the US were in the village at last.

The dreaded melees. The Germans did badly all game in these and the two on the right took so longto complete they ended up tying up far too many German Squads
Just in time really as finally the 1st and 2nd line German troops managed to beat that half squad. The key move though was that my oppo, somewhat bravely, decided to shoot Lieutenant Winters (9-2) and 2.5 paratrooper squads into the melee where the psycho 7-4-7 was still holding 2.5 German squads in melee. This was a bit risky as it might have resulted in the US troops dying or breaking and the Germans not allowing them to ‘defend’ the blank hexes surrounding the final victory building but (using the rule of 7) was actually a ‘high chance’ move. As it happens all the squads US and German broke leaving only an unbroken German 7-0 who was utterly unable to dent the broken paratroopers as they ran off. One half turn remained and masses of airborne troops  just ran up to unleash hell on the poor German officer to destroy all for failure to rout thus allowing the US to win.

Bar the end combat the remains of the German forces get comprehensively stomped..
Throughout the game there was only a couple of moment where the rules needed referring to, one was when I could not remember (the shame!) whether self rally attempts caused a disadvantage if an officer was not present as that might have been full ASL only. The other was trying to work out what happens when everyone in a melee bar an officer is broken and for that we referred to full ASL rules to get an answer. It might be in the SK rules but from a very cursory look I could not find it. Cool, nice to be playing again…Next game we are considering following Battle Schools recommendation and moving to scenario 5 which used the same map, the same nationalities, has one side pure defending and one pure attacking and also adds some machine guns. I better have a re-read of the starter kit rules as I cannot remember if they can lay down fire lanes (I presume not…) Anyway happy rolling all..