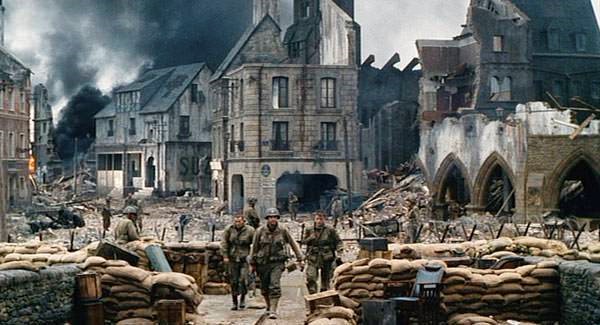 The next starter kit scenario we decided to play is S5 Clearing Colleville.. (hopefully the blog post title will have made this less of a ‘reveal’). This one seems a little more natural to continue from S1 because it uses the same map, same participants (US vs German) same campaign (D-Day, WTO) and a similar situation (holding a certain amount of building) and introduces two new concepts for the beginner. The joy of Machine guns (there’s a book title for the current far right – right there) and SSRs. The SSR just introduces a random amount of US half squads that will make little difference either way but obviously exists to make the new player to have to both read and think about them. The machine guns cover the full range with the German getting one of each (HMG, MMG and LMG) whilst the Americans get a couple of mediums. I suppose the other primary difference is that S1 was cleverly designed to give both sides attacking and defending opportunities. Here we have a more typical defensive scenario where one, much weaker, side  has to hold on against swarms of opposition.
This time we rolled for sides and I received the US Infantry. My oppo had considered his options for both sides (! There is preparation I almost never do) so setup fast with a forward defence (!) and a reserve stack. The  y village is essentially split into two sections and the reserve stack was in the rear section with a good view across the flanking over ground. Since the enemy was so far forward this was obviously a good chance to introduce a new player to the joys of the suicidal lemming half squad attack so bar the medium (placed with the good officer and a half squad on the southern flank) everyone prepped for a ‘leroy jenkins’ assault.
The initial swarm went surprisingly well bar the disappearance of one half squads almost the entire force managed to get next to their German targets. My medium proved less than useful as I could not use the attached half squads inherent (doh!) so it spent its time making weak attacks that did little. The end of the first US turn. The Germans are a little too far forward and paying the price
The front of the German defences rapidly collapsed as I took on a couple of melees then reinforced them very heavily indeed. The sudden appearance of the US reinforcements then made it look as if the game would be over very quickly indeed. This impression was reinforced when my medium suddenly decided to stop being pathetic and went on a rate ‘tear’ that managed to firstly pin then casualty reduce, ELR and break the German reserve heavy machine gun stack! US Numbers are mounting whilst the forward half of the villages defence collapses
All was not entirely bad for the Wehrmacht as another couple of half squads were destroyed and one of the Northern combats was won but by the end of turn two the Germans had lost three full squads and the US the equivalent of two. With the US preponderance of numbers this is not a good changing balance. German reinforcements set up a secondary defensive position slightly to the ear of the key buildings. This proved a wise move..
This left the rear half of the village. The heavy and officer managed to rally and then miss two US squads stacked with the 9-2 who returned fire and wiped them out with a 1KIA where random selection selected ‘everybody’.  In eager anticipation of victory the entire US force swarmed forward.

The American forces mass forward confident in numbers but are they too heavily focused on the right?
Here things started to go more wrong. The Germans pulled of some excellent defensive shooting and managed to pin and break a couple of key US units who were right next door to the key last empty victory hex. I briefly considered the possibilities of ambush victory and withdrawal to get someone in there then realised that isn’t starter kit so instead had to rely on a attacking mistake. This did not occur and though my shooting wiped out most of the remaining Germans one last squad plus officer sauntered into  a victory hex in the last advance phase to ensure German victory. The crux of the engagement. The key square is ‘under’ the four resid where an American squad has just broken and as it was the last squad that could reach the relevant Victory building bar a really bad defensive decision the Germans have won.
The end game position. Though the 9-2 and a half squad won an impressive close combat versus two German squads the last remaining German officer and full squad occupied the last victory hex just in time.
This turned out to be more balanced than it had originally looked. It could prove unforgiving to a beginning defender as the lack of units and the chances to get erased early due to a bad deployment or dice is high. Therefore I would recommend any complete beginners take the United States Army again as opposed to the German as they are more resilient to mistakes though they would get more ‘machine gun’ practice with the Germans.
Cool..Next up Simple Equations. This adds a flamethrower (and what scenario is not enhanced by sugary napalm death?) and fortified buildings. I am the beleaguered Germans  in Achen and looking forward to it.