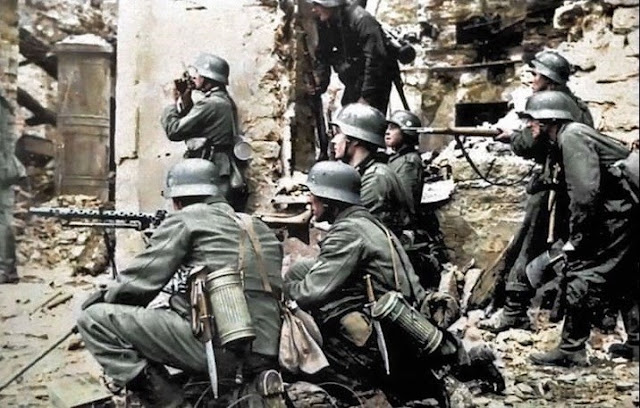 Our next game is actually the 3rd scenario in the Starter Kit One set and takes the sides of our previous two games and adds the extra joys of flame throwers alongside HIP fortified buildings to the mix. Keeping the ‘same but slightly different’ theme it also runs over two maps and has German soldiers who are less than ‘optimal’ with plenty of 2nd line and conscript Volksgrenadier along with a distinctly average set of officers. I get these stalwarts to defend the German borders from the well fed hordes of US infantry.
I have to prevent the Americans taking more than 24 buildings which is approximately half the buildings on the relevant map and essentially takes the rear section almost out of play. They have to approach across clear ground to get to the town though so I will use a large portion of my order of battle as skulking speed bumps (yet another great band name). The intention is to slow the Americans down early and then fall back to the town itself when they get close. Most of my officers are away from the front line ready to attempt to rally an expected stream of routing squads from the early turns.
I do have one ace of a Mg-42 Heavy Machine gun. Though it is tempting to have it covering the open ground I would expect the fire to be a little too hot so have decided to use it in the town itself inside the building at hex BB1. My best officer, an 8-1 , will sit with it and this will also, entirely not unexpectedly, be one of my fortified building locations.
With these the temptation is to make some of the outlying buildings have this but that loses the surprise factor so my other is X1. Here I hope to function as a breakwater and stock up with troops escaping back from the US in the front lines. My aim is to break so many US units that the force of the attack breaks down.
The Game
There are four fairly consistent mistakes that new players make when taking the attacking side within ASL – both within Starter kit and full ASL. These can be listed as –
A – fighting or moving in stacks,B – spreading out attacks over the entire map and not overwhelming a more spread out defence at a schwerpunktC – a preference to using prep fire to destroy the enemy as opposed to other methodsD – a fear of movement risk especially where the potential of damage exists.
This scenario saw all four occurring. Setup…
The German defence was spread to cover all approaches with a forward trip line and rather than concentrate on 2/3rd of the map the US forces were equally widely spread out thus flagging potential mistake B before the game had started. The initial attacks could be described as lots of flank prep fire, which initially failed to do anything, and a slow hex by hex advance in the center which was more successful but not particularly fast (C, and D). Since the forward line was doing its job I was not immediately worried by this and spent my early turns introducing my opponent to the ‘joys of skulking’ (a book that should be in every players library). In return I gained a couple of breaks on the US infantry something that you expect against the US though you equally expect them to turn around and get back in the fight soon enough. Initial American assault in the center collects some ‘pain’ but otherwise has little difficulty rolling up the forward defenders.
Once across the center the US steadily moved forward but were still cautious. They also crunched up as the buildings concentrated from 3 hexes to one hex thus causing issue A. At this key point I stopped skulking and stood to trade blows.

The key turn. Rather than skulk the central German defence stood and slogged it out which could haveproved disastrous but did not
The resultant prep phase being remarkably successful with the Heavy Machine Gun going on a rate tear against a stack accompanying the flamethrower (the end result was the flamethrower squad dead with a further quad casualty reduced and broken along with an officer – the need to keep that flamethrower close trumped the need to keep the troops alive and that minus one for shots against a flamethrower proved key). The big lead stack, which was being led by the scary 9-2, was repeatedly broken leaving behind two medium machine guns. This was the key to the game as though on the same turn my leading left flank squad broke allowing the US right flank to swarm forward the next turn two squads worth of Germans rallied and the Germans were able to push forward slightly. I even tried at this point to pick up one of the enemies medium machine guns but the hex was obviously cursed to all who entered it and for the rest of the game anyone entered promptly routed out next turn.

The end of the decisive prep phase. The US strike forces are broken and not enough strengthexists to keep the pressure on or even to hold back the Germans.
The US tried but now had a perfect storm of brokies and thus were not able to get anything in play before the end of the game. In a further attempt to rub salt into the American wounds I also attempted to pick up the flamethrower picturing using it to erase a rallying US super stack but as my conscripts rolled a six they were obviously less than enthused with my aggressive mentality…
The End Result 0 buildings captured.

End Game. Note the supersized US rallying stack. I was hoping to zap this with their own flamethrower but theconscripts were less then keen on going anywhere near the dangerous thing.
Objectively attacking is difficult for a new players as there is no ‘safe’ approach – this is usually why the attacker outnumbers the defender. In this scenario I would probably recommend some half squads to draw fire and to concentrate on one flank or perhaps one flank and the center as a maximum. The flamethrower should probably be used to tempt the German to hold fire against advancing squads. I would even consider having the decent officers at the rear to rally the troops. Though the negatives are useful the US army has a lot of firepower even when advancing and can cope without. Also there is a lot of open ground to cover and US troops will break. The quicker those boys get rallied and thrown back in the more pressure the American army can provide. The other factor is that the Germans are not good troops – if they break they will not return quickly if at all so more risks can be taken to get them into nasty situations than maybe could be taken with ‘better’ troops.
It is actually a fairly good replay scenario with repeated playing’s to ‘grok’ attacking required. Next up we are shifting to S4 ‘Welcome Back’ and an exit point scenario with weather.
(originally posted March 13th 2017)