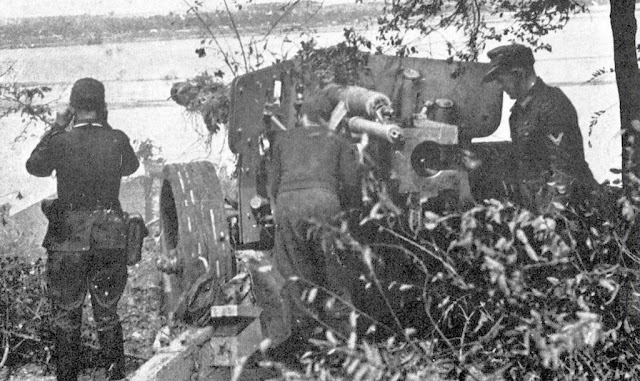 Originally published April 2013 this game was part of a series against FargoGamer from Scotland. Both of us were learning the games so they often took a while, usually more time being spent working through rules than playing, but good fun all the same. This one has also 'lost' all the game photos.

Managed to finish the game (with some magical waving of ‘nothing to see here’ going on).
First up the dice gods instantly decided I was not a worthy recipient of good news and then went ‘meh’ at my opponent as well with one of his tanks fixed its armament followed by the other rolling a 12 and recalling. My tank natural failed to fix anything. I then attempted to stop towing the 88 which allowed the Russians to shoot at the truck with its KV1 MMg blowing it up – resulting in much rule searching to see if the gun was auto destroyed or not. Eventually we logged on here and found a post which said yes so 45 minutes later we moved on. MY infantry passed enough task checks to assault two of the KV’s and failed to dent them (that does bring up a rule query – when the truck was destroyed the crew got out and I moved them forward to attack the closest tank – we could not decide whether they counted for a motion start attempt or not (basically do they count as in or out of LOS – the tank could see the hex they were in but do they count as out of LOS as they were in the truck?), as it stands we allowed a motion role which passed for both tanks and was probably the reason I failed to destroy them in combat).
In the meantime I had set up a strong screen outside the wood with the armour leader tank, the two half trucks CE (so to permit their machine guns to be used) and the 37 anti-tank gun. This apparently provided strong dis-incentive for the Russians to leave the wood.
The following Russian movements (the speed of the Russian exit for the wood indicated the word ‘movement’ may have been more than appropriate) were to get the two remaining KV-1′s with working armament off the board. The remaining two Russian tanks turned around and sped (ha ha ha, platoon movement and the word ‘sped’ I crack myself up sometimes) out of the wood as the Russian infantry, very confused now tried to assault the remaining anti-tank gun and screen the tanks at the same time by moving to the South edge of the wood. Finally the huge concealed officer stack exited the West end of the wood and seemed prepared to take on my strong screen there.
All seemed to be going well for the red hoards when on my next turn
I attempted to repair my broken MA and also rolled a 12 and so lost a second tank. When I followed this by breaking the machine gun on a half truck AND then malfunctioning my main armament on my armour leader tank when trying to blow up the super infantry stack with HE things started to look bad, especially with the 88 gone.
A certain amount of infantry skirmishing now resulted as the two Russian tanks swung out of the wood and dropped South onto board 4. I was attempting to position my infantry to force him to come close and at the same time keep the Russian infantry away. At one point I had a close shot at the rear of the tank with the LMG, took the shot and it was SO not worth it even against 1 armour. As a reward for making a shot which required super human die rolling to do anything that squad was then demoralised by some Russian infantry with an LMG no doubt shouting – “don’t use that against a tank Nazi scum doofuses THIS is what an LMG is good for”
As the two remaining Russian tanks moved up board 4 I proved to be notably unsuccessful at destroying any Russian tank in combat and the game started speeding up as the infantry were left doing little. On board 5 I eventually managed to repair my last tanks main weapon and rushed it to the bridge to try and stop the last two tanks escaping. We practically gave up on most of the infantry at this point as they could not impact the decision in any way and waved in the distance whilst mystically intoning – ‘infantry stuff happening here’. The Russian tanks pummelled forward managing a lucky 3 roll on a 2 mg shot against my only close infantry (with a DC and officer) killing the officer and breaking the dc squad meaning only my Panzer had a chance of stopping them. Not bothering with the motion bounding shot (didn’t want a 12) I staked everything on the last turn. I moved my Panzer (in my turn) up right behind the two Russian tanks and stopped. Took a bounding fire shot which missed. On the Russian turn the first tank moved. I shot, hit (just) and (just) managed to blow it up. Unfortunately I did not rate. The other Russian tank moved a square and I took an intensive fire shot and missed. Now revelling in its lack of need to platoon move it rolled of the board and the Russians had won.
This has possibly been my most bizarre game yet but great fun for all that and I seem to be starting to get some idea of the tank rules. Congrats to my opponent and now I plan my revenge! Platoon movement seems to suck big time. My biggest mistake in retrospect was not setting the 88 up immediately as it was doomed as soon as the Russians arrived whilst still being towed.


Anyway apologies for the disjointed nature of the update as it is late now so it is much less coherent than the initial description.