S6 - Released from the East 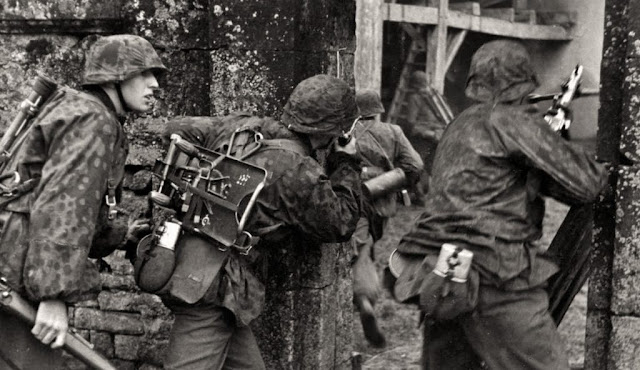 Another day and another starter kit scenario. This was played over VASL PBEM which is my ‘no live games’ default position – I like how relaxed PBEM is though you are at considerably more risk of your opponent just ‘dropping’ half way through as when things go south the extended time can make the ‘bad’ drag quite badly..


So this is the last of the Starter kit 1 scenarios and involves an elite force of Germans (SS with increased broken morale) trying to stave off equally elite Siberian assault troops. It is winter and the Siberians are wearing appropriate camouflage so open ground is easier going that it would normally be and the Russian player has the option of setting aside a large chunk of his force to arrive as reinforcements on turn 3. The closeness of the potential Russian start locations to the stone buildings , snow suit advance more protection combined with the high morale means that shooting is unlikely do have very much impact. The Russians will be attempting to get into close combat and use their numbers to overwhelm the SS.
With that in mind I took control of the forces of evil and set up a net type defence with outliers which I rather hope can be pulled in when the main Russian line of advance becomes known.
My oppo set up strongly in the central north thus going for the left most victory building and also put aside the reinforcements who presumably will be trying to take the right most building. For a beginner to the game this scenario provides a good look at a veritable ASL staple – having to seize separate specified buildings with a superior force. The defender gets to learn (hopefully) how to manipulate the attackers into making time mistakes and the attacker needs to not lose track of time and the components of the assault. As such fun for both!
The Game
The Russians came on steadily but hesitantly Assault moving forward (admittedly they do have bugger all distance to cover) and shrugging off fire. The only negative for the Soviet hordes was a Defensive fire shot by one of my rearwards machine gun posts which managed a 1mC on a stack of Russians (8-0 squad + light machine gun squad) with all failing the morale test and the machine gun failing spectacularly ELRing and casualty reducing (the 1mc was repeated next turn as these boys had nowhere to run to and this time the now half squad was destroyed for failing a MC).  Shooting luck was evenly spread as one of my central squads (in a victory building irritatingly) also managed to break and casualty reduce. This caused me to delay my net shrinkage as forces had to be diverted to hopefully dissuade the Russians from stomping into a victory building on turn two. The early attack going well for the Siberian Hordes
The Russians pushed heavily across the board engaging one of my Westmost squads with two of their own and easily taking the central building. My shooting was excellent but so were the Russians morale and rally checks (when needed). The reinforcements all piled into the West putting that building under serious threat as well and then some luck. I had added another squad plus officer to the westmost combat (evens to win) and failed for the first round but fortuitous placement of the medium machine gun to prevent Russian reinforcements gave me another crack of the whip which caused a win. Possibly the winning move! the 8-1 and a squad helps out in the combat and endby destroying two Russian squads for no loss.
This killed off two enemy squads and freed up two of mine and a negative leader. I was thus able to provide a lot more protection to the Westmost building especially when faced with (at the mid-point) only three squads. When one of those ELRd and broke trying to cross open ground things got better still. Elsewhere I still had squads who could threaten to re-capture victory buildings so the central and eastomost Russian forces needed to tidy up before coming over. It could end up one of those mad open ground rushes that ASL sometimes finishes with. So the next Russian turn proved. Several squads switched to non-assault move movement and moved next door to unfired German squads this caused the breaking of a Russian in the West and in the East a further Russian attempted to move through the resid (survived) but disintegrated under the final fire shot of a squad plus the negative one officer. 4 down 3 is a good shot which made the squad disappear. The final Russian squad in the East, carrying a Demolition Charge, obviously decided that now was the time and Cxing sprinted next door to one of the victory buildings and an SS squad with a medium machine gun and -2 officer. This seems….brave…..I started to worry when my 16 down 4! Shot managed to only generate a morale check which they passed by one. Then the unfired squad higher up also generated a morale check (4 down 2) which they passed by 1. Seven change of pants time for my boys but then they tried to place the demolition charge. I took a final fire including the MMG (which broke) with another bad roll but with -4 on the roll there are few really bad rolls and a standard morale check was called for which they failed….Phew….. The most stress all game was caused by a demolition chargearmed unit which is currently broken under the 8 resid aftersurviving a hail of fire
Things seemed to de-generate for the Siberians now as they failed to win either of their combats in their turn and lost another half squad to a box carred rally attempt. I then adjusted my line to be able to generate lots of -2 shots on any troops trying to use the roads to quickly swamp my most secure victory building. I think this cumulative effect got my opponent down as the logical (though still risky) final moves would have been for the officer and squad (after winning their melee) to move down to threaten and then take out me squad + lmg. The bottom two point five squads to pelt along the road and the top two squads plus officer to pelt along the other road. With 8 morale troops they might have got lucky and got through the hail of fire allowing a last turn last ditch attempt to get into that last building. The officer led squads could have moved 9 in turn 5 then would have (if they survived) another 8 max (with road bonus) in turn 6. The bottom lads would not have made it but could have gained a fire position for a hail mary assault fire attempt. Hmmm 4% success chance perhaps. End Game Position
That didn’t happen though as the mid platoon sent 1 squad south to reinforce the combat in the Eastmost building and the officer and other squad went to attack my mid-map blocking squad. Though winning both the remaining combats and thus seizing a second victory building there were no troops capable of breaking or even getting to the last victory building. For a first game back after a rest my oppo made a valiant effort and I think he was correct in stating that the big turning point was the reinforcement of the Westmost melee by my -1 officer and squad AND winning that melee without loss to my own troops as that created too difficult a task for the Russians to overcome. Melees are always a crap shoot that have just as much power to delay your offensive as to enhance it..Good game.
(Originally posted March 28th, 2017)