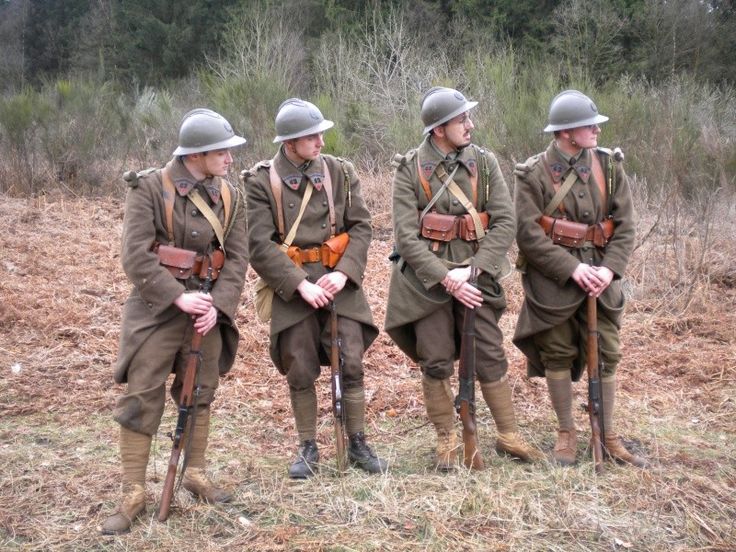 It is the 8th September 1939 and a formation of the 'Gardes Frontaliers' is about to get ambushed by advanced elements of the Grenzschutz in the village of Berensdorf and to run pell-mell back to the frontier. I get the French in a the welcome return of a VoiceWithBoards game. This is not a very complex scenario but does have an unusual setup. I start up practically next to the ambushing forces and then have to get a certain amount of exit victory points off of the South edge of the board. The more troops the Germans manage to kill then the more exit points I need to win.

Therefore my primary decision on setup is how many speed bumps to leave behind. I do have a couple of advantages. The first is that unlike the historically 'second rate' leavings that tended to be forced into the Gardes Frontaliers mine are actually 1st line counters. The second is that I have (I really hope so otherwise this will be a severely curtailed playing experience) some cover in that first turn to get my lads back as quickly as possible in a stack. This admittedly could be the shortest scenario I have ever played if there is a line of site to either of main stacks at the start.. The Germans do have 2nd line troops - the Grenzschutz  were apparently equivalent German border guards.

Setup involves the French and Germans practically touching with the French having to move rapidly away from the Germans to their exit hex (and not through them). Looking at the sight lines I decided to prioritise a mass of troops to leave with a few speed bumps. For the French entering nice and safe buildings is anything but as the Germans have booby trap capability on all boards - oh and lets not forget a horrifically high sniper number at '5' so 'shooting' things should be avoided as well. 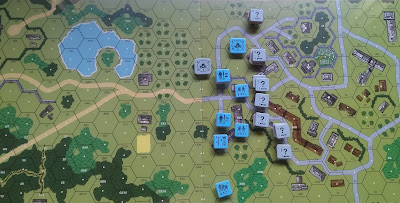 Setup. Once we had realised that the French are running 'left' and not 'through' the Germans (so the Germans had a re-do on setup with the slight advantage of seeing most of the French setup)

My initial plans semi worked. I managed to get the majority of my troops away from close contact and only mis-saw two sights lines allowing the Germans two shots one of which they not only aced they also destroyed wiping out a full squad with a KIA. Ouch. Elsewhere my speed bumps failed miserably as well. One of my forward half squads broke on another horribly low attack roll and then my strongest speed bump (squad+light machine gun) had an officer+light machine gun+squad move next door allowing a 12 up 2 shot which did nothing. This, if anything was the key roll of the game. Following the rule of 7 it was risky for the attacker to attempt. A 12+2 on average should get a NMC whereas the advance fire 6 plus 2 (negative 1 officer) *should* on average not succeed. Anyway in the rout phase I then made a mistake in deciding to break the squad with the light machine gun and to move it back to the wood. In retrospect this was a horrible decision mainly because both it and the broken half squad would soon surrender as No Quarter was disallowed - this is particularly bad because the Victory Conditions increase the exit requirement for every two CVPs the Germans get and prisoners make them doubly effective. So it is better to die in combat than to break and be captured. 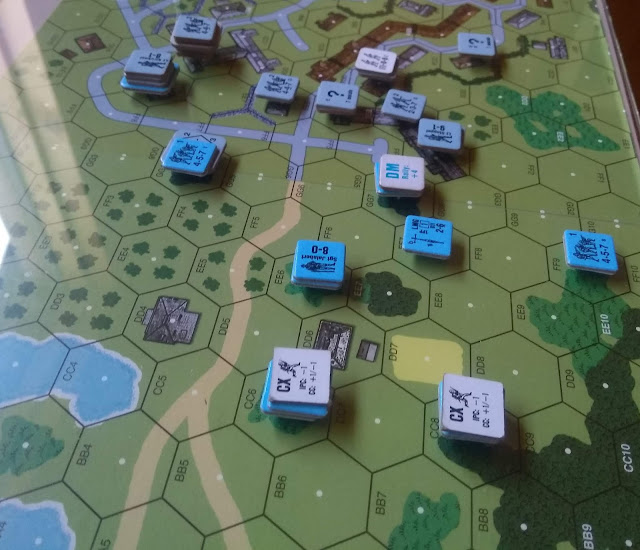 The DM is my horrifically misjudged self-break after the 12 up 2 shot had (possibly) cost me the game.


In the next turn things got worse. I had two outlying squads in the East and West and the West one was hit with a long German shot that was low and broke that and the North was equally broken (and then captured....). Things were looking bad but as recompense the broken west squad managed a snake eyes self rally attempt and generated an 'extra' 7-0 officer. The game now turned into a set of ways (for me) to run as fast as possible and avoid letting the Germans get shots in while the Germans had to move to maximise long range shots as much as possible. 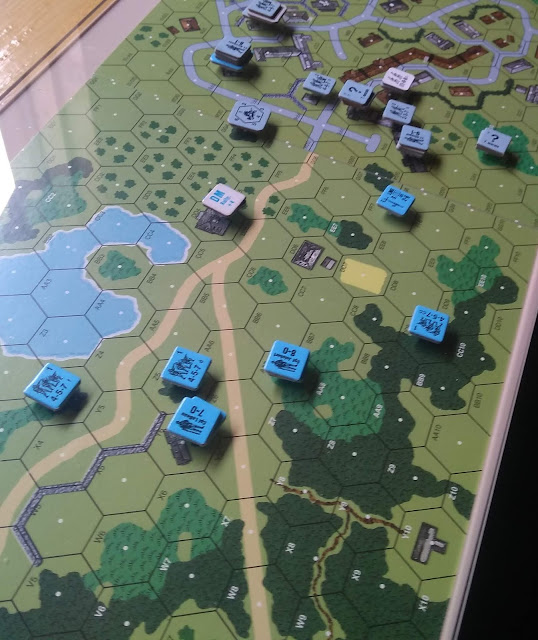 Everyone else has disengaged nicely


I think I did all right at this phase though the Germans did manage to get some scarily high group long range shots that were quite scary to face. I survived them though with by turn four a single French squad and 8-0 were within one hex of exiting. The Germans were in full 'charge' mode at this point and firstly a squad CX'd into firing range. The squad fired, did no damage but laid two residual. This residual then did more damage than all my French forces had so far by breaking the next squad to arrive. Finally a negative one officer and squad also jogged in and the residual caused a pin check that both (naturally) passed. I was not liking the odds at this point so decided to take a final fire shot at the same hex. Predicting a 'five' for a sniper I naturally rolled a 'five'. It did not do anything though and the NMC caused by the check was (again) passed by both officer and squad. Then came the advance fire shot which was a four flat (-1 officer +1 CX'd) and with a high roll missed. My squad then danced off board. 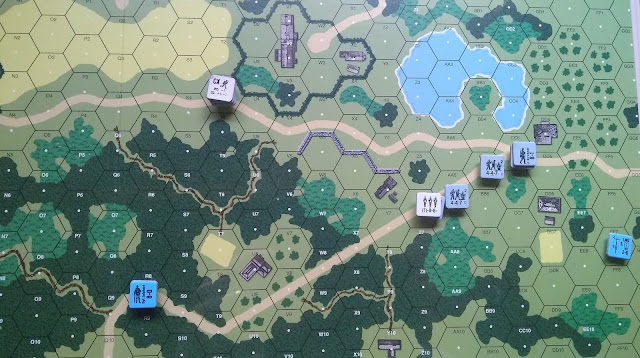 End of my last turn. All off except one squad plus officer waiting for Germans to appear down the road 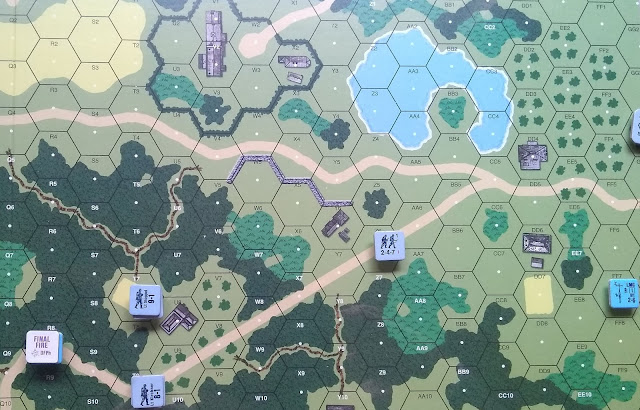 many Germans did indeed appear down the road


I had not won though. I managed to get 13 points off board but had lost one and half squads dead (3CVP)  and more painfully two and half squads captured. Those alone added 10 CVP. So total lost was 13 CVP which meant an extra six EVP were needed so I lost by two points. Even if I had lost in melee that first squad I would have still been behind by one.

I haven't played a scenario quite like this before and I enjoyed it more than I thought. The key (for the French) is skill in avoiding dangerous Line of Sight (obviously not one I possess) then the luck of the game comes into it in that you need to reduce decent German shots and hope they don't roll low enough to offset all the terrain you are putting between yourself and the German bullet. It's lovely to be playing on the boards with counters again though. 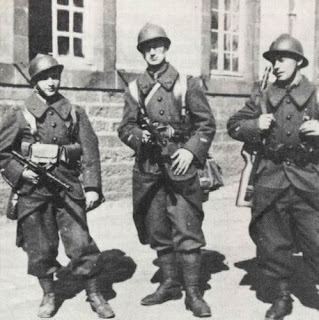 At least some of the lads escaped to fight another day. Hopefully.. 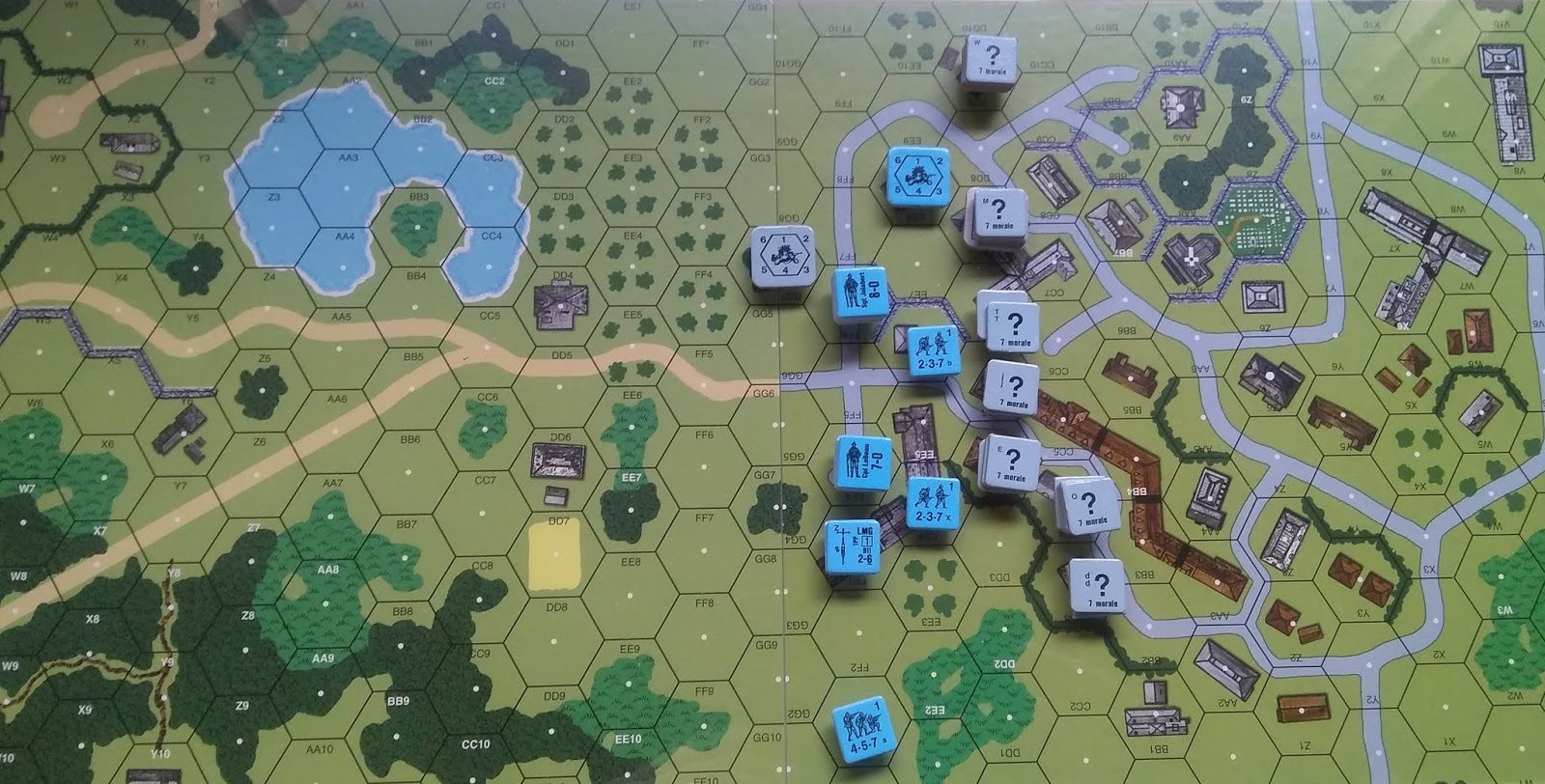