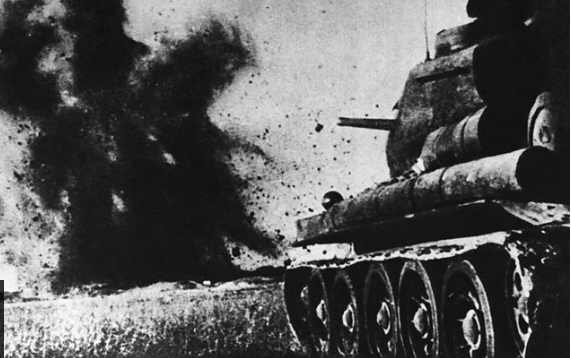 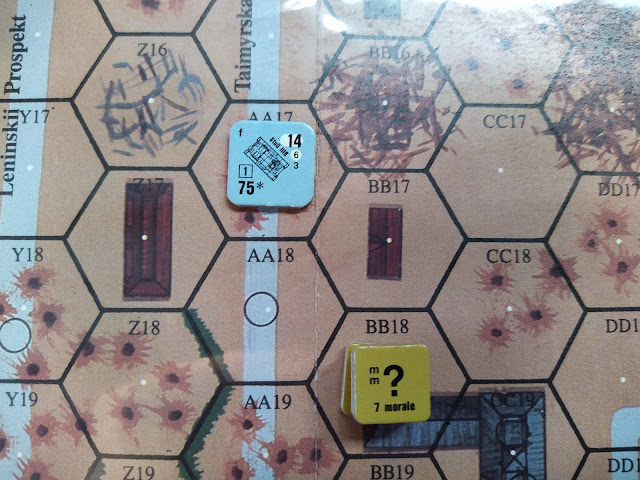 Our first example occurs in the deep (and slightly pink) heart of Stalingrad. A Stug III B is positioned close to the Commissar's House and in the Russian turn the active player has advanced a concealed stack consisting of a 6-2-8 a Heavy machine gun and a 9-2 officer into the edge of the Commissar's House at BB18. 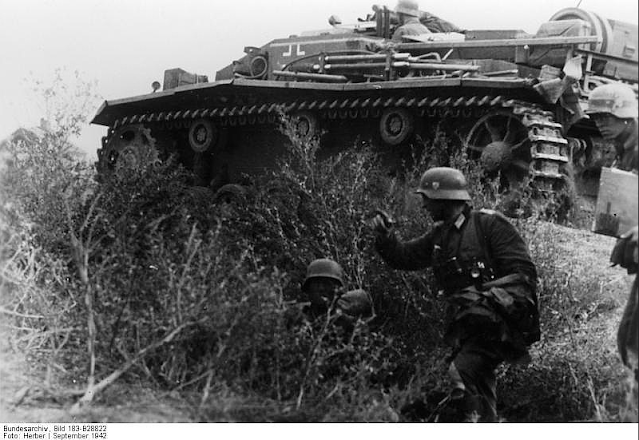 The base to hit number is 8

There are no modifications from table C4 for ammo at this close range so the modified to hit is also 8.

For total dice modifiers of +5.

The dice are now rolled and glory of glories a double one is rolled. We now pause while the Russian player curses and moans they  only get snake eyes for wind rolls while the German player tries to contain his unbounded cheer…

Once done the players start to work out the results

The ORIGINAL DR is 2

Add the dice modifiers of +5 makes 7 which is under the MODIFIED TO HIT number of 8 but obviously not less than half the modified. So a critical hit is not guaranteed. The German player now has to roll a single dice and will obtain a critical hit with a roll of 1,2,3 or 4 (less than or equal to half the MODIFIED TO HIT of 4) and a normal hit with 5,6.

In our example he rolls a 4 and obtains a critical. The 75mm gun is a base 12 on the IFT it doubles to 24 with minus 3 for the tem now counting as a negative. On an average roll of 7 the Russians lose concealment and face a 1KIA, a 12 would  cause a 2MC (random dice roll needed to work out if the squad or officer (or both) takes the critical)

Scuttling back to the Early War we have an early British Cruiser tank minding its own business  when a dastardly concealed German stack advances behind it into the stone building in hex K9. Though the British player doesn't know it the stack contains a 4-6-7 with an ATR looking to cause trouble with the tank's weak rear armour. The jokes on the Germans though as that tank has weak armour everywhere.... The valiant British defender briefly considers spinning and firing his (not too shabby) machine guns but the VCA spin and concealed half  firepower would drop them to a 2 up 2. Instead he decides to fire his main armament. 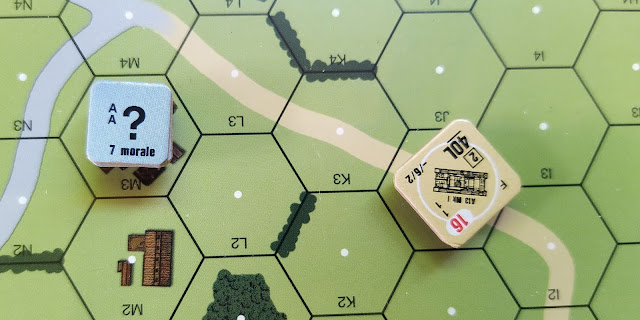 Add the modifiers and the FINAL DR is an unsurprising 12 and 'might' be a miss by a mile.

The player did though rate the Main Armament and as it took 2 MF to get into the building he resolves to shoot again on the second movement point. The BASE TH and the MODIFIED TH remain the same but of the dice roll modifiers Case A goes (the tank cannot gain an acquire on the first shot as you cannot acquire concealed units  - unless shooting ATT) for a more 'feasible' total of +5.

The player rolls again and this time makes an original dice roll of three (coloured 1 white 2). Again we stop while the German player glares and considers leaving the room temporarily.

Three plus the Dice roll modifiers pushes the FINAL TH Number to eight. So this is a hit but as the FINAL TH is not less than half the modified (three, and though the ORIGINAL DR is 3 the FINAL DR is used so '8') he gets a normal hit.

This will be an unimpressive  4 flat on the IFT.

The German player passes but the British player is relatively happy because his main armament rated again so there is now a -1 acquire in target and he can now wait until the Defensive Fire phase to take an 8+2 with his Bow mounted machine gun then a 2+2 with the CMG (IIFT users would probably combine both for a 10+2) and then (if still needed) a Main armament shot with 8 as the MODIFIED TH, dice roll modifiers of only +2 ( tem +2,buttoned up +1,  -1 acquire) so has a nearly average chance of another normal hit (would need a 6) with a possible intensive of 5 to hit (other options naturally exist. i.e it could rate again when it has a nice rate of 2 or perhaps kick into motion if another unit appears and possibly throw smoke...if this tank has smoke.....)

All hail weapons with rate! Admittedly that example was hardly less 'lucky' so let's try again...

It is near the end of the war now and some German infantry (a 10-2 and a 4-6-7) are trying to escape of board along Q10,R10 and S10. Nasty residual exists on two of the hexes so they are using the last free hexside and have entered S10 in a desperate attempt to get off board this turn. The British defender though has a Comet sitting on a hill (as you do) and takes a shot as they move in. 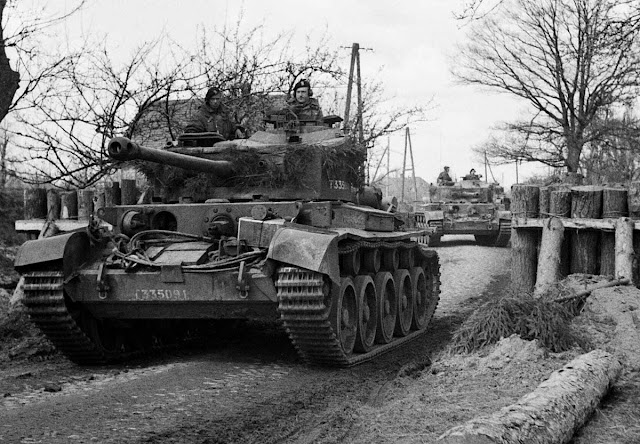 The British player starts as before with section C3. At 13 hex range the BASE TH number is 6.

5 minus the DR MODIFIERS drops the result to a 3 and as 3 is less than half the MODIFIED TH number of 3.5 it is a critical hit with no further single dice rolls needed. (So the British player would have gained a critical hit on a roll of 2,3,4 or 5 - a 28% chance of rolling a critical hit ( and a roll of 6-9 would get a normal hit)

The result roll would therefore be a 24 flat causing a potential 3MC with an average roll of 7 and a NMC minimum (without a 'dud') - as there are two units moving a random roll is needed to work out which takes the critical and which the normal hit (or both). Since the roll did not generate rate the British player also decides to leave residual - a 6 factor residual counter is added  to make all other following infantry face some unpleasant rolling (residual is half the normal hit value and not the critical hit value). 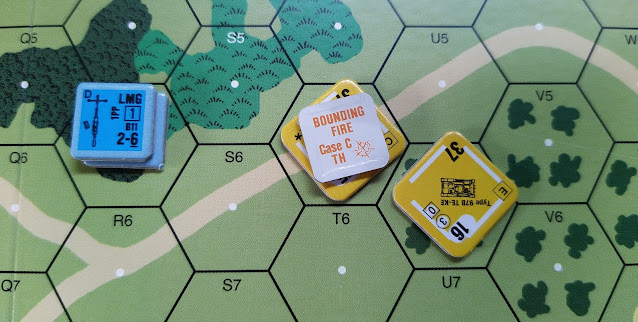 For our final example we have a Japanese light tank in its movement phase that has stopped in hex U6 and is taking a shot at a Vichy French squad in a wood with a light machine gun. The tank in front is non-stopped.

The ORIGINAL DR made is double one so the FINAL DR is 2 + 6 so is '8; which is exactly the same as the MODIFIED TH number.

The Japanese player now rolls a single dice and any roll of 1,2,3,4 causes a critical hit (8 down 1 on the IFT) with 5,6 causing a normal hit (4 flat). This example looks fairly close to example one but the key point here is that the italiced sentence prior to the ITT section of C3.7 DOES NOT APPLY to ITT attacks

Conclusion
So hopefully that has made something clear to somebody. If not only to me. Several people helped explain all this in the first place and from memory Martin Vicca, Martin Mayers, Steve McBee, Carl Nogeira (on fb) and von Marwiztz (on GS) all provided lots of assistance. If anything is still wrong then please message me or leave a comment and I will adjust accordingly. Thanks for reading!