Continuing my 'slow and detailed AAR' we now cover turn two. For those who have forgotten the previous post is here. The Russians went all in turn one with a furious attack which was primarily repulsed. The advantages gained from the slaughter were the NKVD getting into Hall 4 (the Martin Oven) and the Russians getting a toehold at the Eastern end with the Germans broadly holding the center and surrounding southerly halls.

Rallies went well for the Soviets with a large percentage of broken units coming back. The Germans had a 'worse' phase managing to unblock the Heavy machine gun but rally absolutely no units. This meant the Soviets could apply pressure again. Bar the ineffectual kill stack and the equally ineffectual foxhole based 6-2-8 in the road at Y27 all the Soviets available infantry moved to try and drag fire and things went well. In the West of the factory the German heavy machine gun armed 8-3-8 in N21 could have badly damaged the attacking Russians but missed with the Heavy Machine Gun then cowered its first fire shot so did nothing. This allowed a Russian squad to fire up through the collapsed roof at the broken officer re-demoralising him then a decent advance fire shot broke the 8-3-8. Both it and the officer when then erased for failure to rout (the collapsed roof giving the 9-2 no direction to move up top).

In the West if the factory the newly rallied Commissar positioned himself well for rally duties and bar the Y27 squad breaking to a fire group from the hex next door and routing to the white building the NKVD managed to take position protecting and holding the East end of the factory fairly easily. 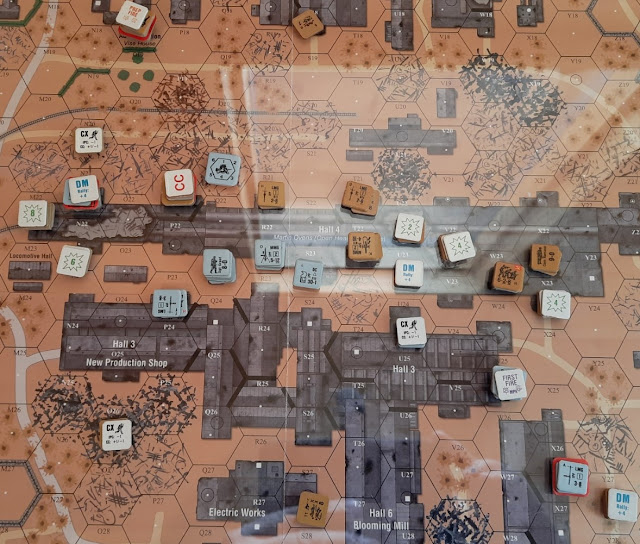 In the centre things also started well for the Soviet army with the berserkers charging onto the roof, the defending half squad was then broken by a sniper giving the berserkers a very easy combat kill. The ground floor was interesting though due to the huge amount of interior walls which basically allowed the Russians to move right next door to the German defenders without taking any fire. A huge three squad plus 9-1 Russian stack then  broke a 4-6-7 on the East side of the factory (who had already FPFd at them unsuccessfully) before the huge stack left the factory scuttling around the interior wall, to enter close combat with the 2-2-7 plus flamethrower (6-1 odds HTH with officer would be 11 to kill and 12 to casualty reduce and the Germans back would have a 4 against the entire stack..yuck). Next door to that a 6-2-8 repeated the trick against the officer and 4-6-7 with medium machine gun. All of a sudden it looked like the strong German center would be ripped apart and all because the power of those interior walls to prevent fire and allow combat had not been recognised. 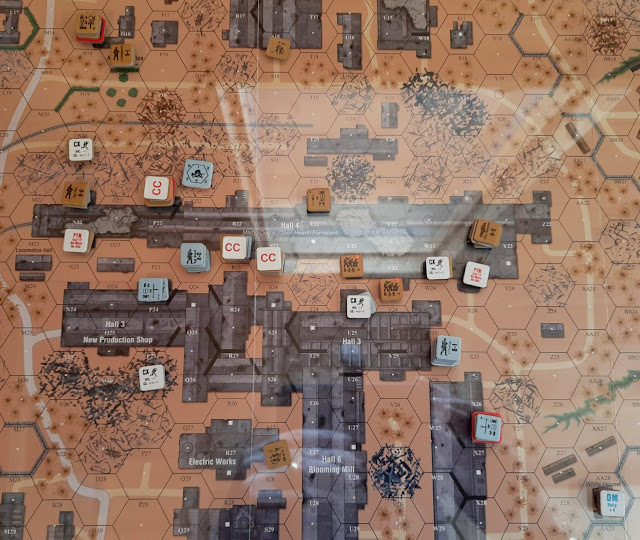 Noooo, where has my defence gone.

The combat phase rolled by and started with the solitary 6-2-8. Both sides failed to ambush and both sides failed to do anything in Hand to hand (the Russians needed 7 the Germans 6)!! So that combat turned into a rolling hand to hand. I was expecting the flamethrower squad to meet an abrupt end but the Russians rolled a 6 on the ambush an the Germans a 2 ambushing them in return nicely. Rather than risk the horrific odds the Germans just withdrew next door to S22 and grinned at the three squad + officer stack next door whilst gently waving a lighter to the flamethrower.. What a switch over (allowing the flamethrower torches them next turn) . To quote from Scooby Doo 'wowzers'. You cannot really take anything for granted in this game. 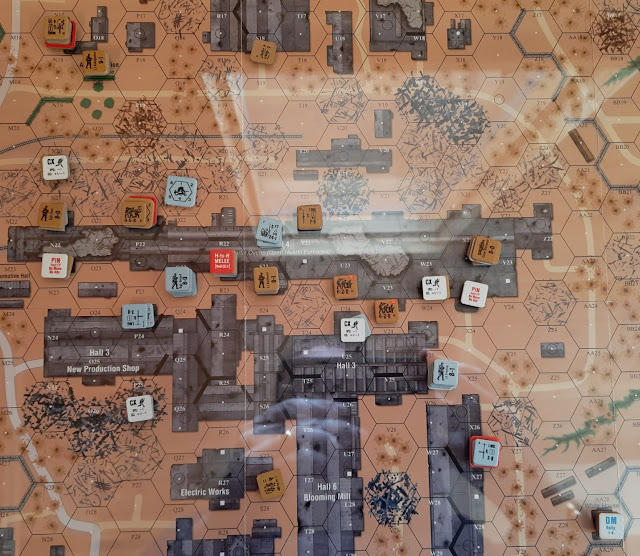 And yet that flamethrower escaping could be fortuitous..
German Turn 2

Rallies went well for both sides. Bar one Russian Demolition carrying 4-5-8 getting casualty reduced - probably due to the fear of wandering around the battlefield carrying a large chunk of high explosive both sides got around 80% of their brokies back. This probably assists the Germans more than the Russians though at this point as it allows the Germans to consolidate.

The game then swung into the prep fire phase with two absolutely key rolls and unfortunately for Mother Russia these went well for the Germans. The first was the flamethrower which gained its revenge with a snake eyes roll... causing a 2 KIA (after cower). This took out the officer and one of the squads with a light machine gun melted to junk. The other two squads auto broke but if the Russians cannot get rid of two of the German squads blocking the rout paths in Hall 3 then they will also get killed for failure to rout! So the poor Russians went from a 6 to 1 probably hand to hand attack that favoured the Russians for the ambush roll to being totally destroyed by that self same crew squad. Makes logical sense in that three full squads of soldiers are more likely to be ambushed by a soldier with a flamethrower and a mate but wow. As said  at the end of the above Russian turn two. You absolutely cannot take anything for granted.

The next key roll was that the Germans decided to shoot into the hand to hand combat next door. Logically the soldiers in the combat (8-0 and a 4-6-7 with MMG) were likely to be killed in combat and even feeding more squads in would have a high likelihood of losing more squads than the Soviets. The shot was taken at 36+3 (LOS left the building and re-entered) and led to the German officer breaking and the squad pinning  with a 5 (no sniper for the Russians). The Russian squad broke and ELRd so the gamble worked! This (now) 5-2-7 also had no where to go so will also get wiped out in the rout phase. What a prep phase.. 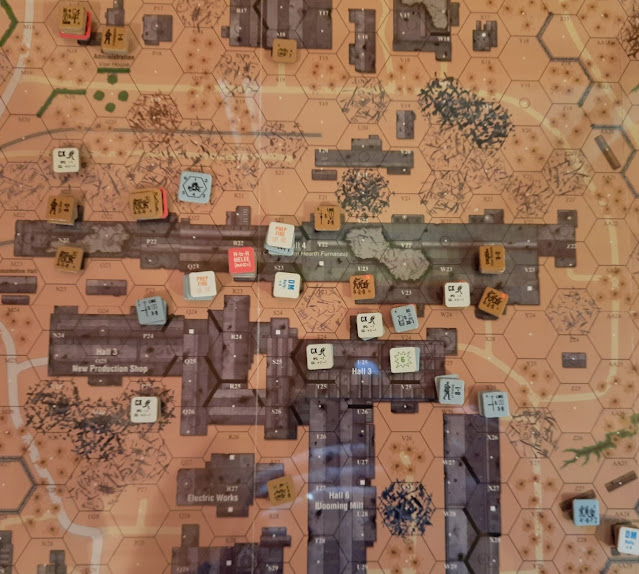 The Germans did not have many squads left so used what they had to reduce the risk of opening a rout path and to generally irritate their opponent. One squad left Hall 7 and scuttled over to re-demoralise the broken 6-2-8 in the White House at AA28. A squad with a demolition charge moved next door to a Russian who had a line of sight to an counter exhausted squad that was blocking a Soviet rout path. The Russians showed remarkable fire discipline and refused to fire. The Germans then tried to set the DC on that squad which did cause a first and final response that failed to do anything both times! So now a NKVD squad has a demolition charge sitting on it. The final movement was a 1st line squad plus medium machine gun moving from Hall 7 over to Hall 3 to ensure that there was no chance at all of a rout path opening and the 4-6-7 plus light machine gun on the Hall 7 roof came down the stairs and started to move through the ground floor of the hall.

Russian defensive fire was an anti-climax. The Soviets gained their own snake eyes - but on a plus 4 shot (+3 factory tem and +1 cx) along with the cower forced it to a pin test, which the Germans admittedly failed, but the comparison with the Germans own snake eyes was marked. Elsewhere the factory walls continued to make this a strange combat experience. The Russians suddenly realised their broken squad in T21 was next to a German squad (the flamethrower squad who had 'withdrew' there in the combat phase last turn) so should have been demoralised then. It makes little difference as that was post rout phase and you cannot lose DM status if in the unusual situation of starting the game next to an enemy unit - even if you cant actually see it due to the interior wall. So after all that another squad gained a belated DM status. The Soviets then re-demoralised the squad the indomitable Lieutenant Freitang was trying to rally in Hall3 W25 before spending some time working out the TEM of a shot from N21 to Q23. It was +4 in the end - three hexes of interior factory TEM and one of those hexes had collapsed roof debris so adding a +1. Then it was suddenly realised that the LOS leaves the factory on the P22/Q23 hex side so they couldn't actually see each other so no shot. Finally the Demolition Charge spectacularly failed to do much (1MC easily passed by the NKVD defenders). The Germans cannot really complain..

With no need to risk combats the Germans moved to consolidate their position in the Centre-West part of the Martin oven plus covered some approach routes from the South. Finally it was belatedly realised that the White House (AA28) was actually off map so that squad was shifted North one hex before running further away. 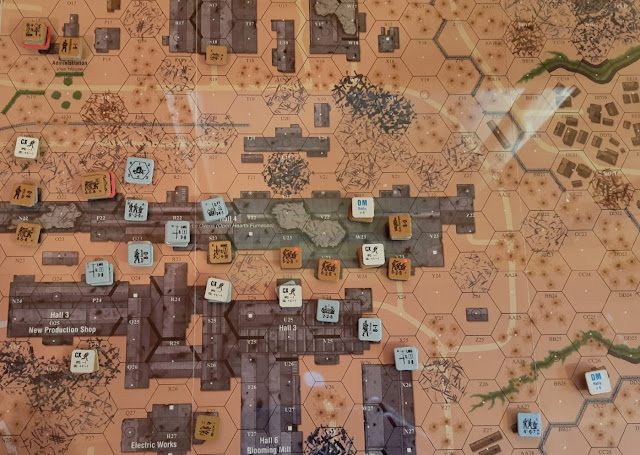 What a switch aroo from the last Soviet turn. Suddenly its the Russians looking precarious. I'd like to say its the result of talent but 'luck' and an ambush role were the main drivers sadly.

From having a good position this turn has utterly brutalised the Soviet attack. The Russians do now have a decent officer and some rallied troops who can reinforce the East Side of the factory but are facing a group of Germans defenders who are starting to grow in confidence. That furious assault by the Soviet in turn one almost (and probably should have) won the game for them practically by turn one though.. 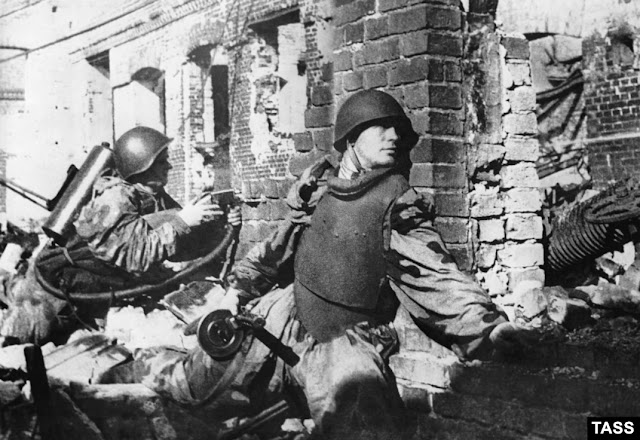 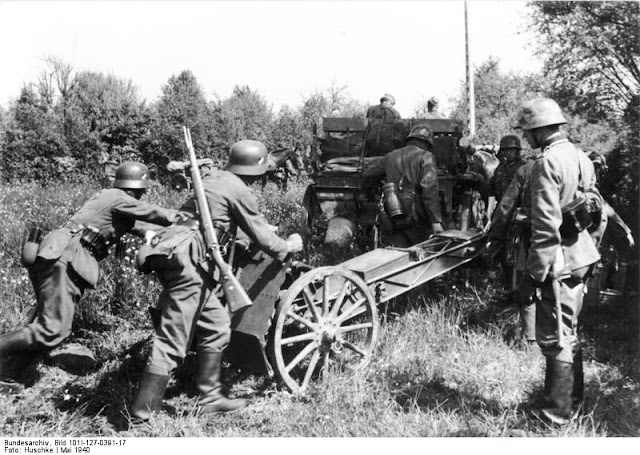